Despite futile attempts to hide their sinister crimes, the leadership of the Chinese Communist Party (CCP) has not been able to successfully fool the international community. Widespread arrests of citizens, long periods of incarceration without trial, deprivation of property and employment, torture, slave labor in places of detention, administration of psychotropic drugs to healthy people – these are just a sample of measures the CCP has used against Falun Gong practitioners , simply because they cultivate themselves according to “Truthfulness-Compassion-Forbearance.” *

The most egregious of these persecution measures is the forced removal of organs from living Falun Gong practitioners and other dissidents. Medical doctors, sworn to heal their patients, now, under the direction of the government, murder those who lie helpless on their operating tables so that the CCP can make a profit.

How harsh are the lessons of history, and at the same time how short is the human memory…

In December of 1946 in the German city of Nuremberg, after the infamous International Military Tribunal was complete, TheSubsequent Nuremberg Trialsconvicted23 Nazi doctors of war crimes and crimes against humanity. Going against their moral imperatives as physicians, a large number of German doctors committed unconscionable acts at the request of the Nazi Party. Over 49% of German doctors joined the Nazi Party, participating in and often taking the lead in such crimes as the “Final Solution,” forced sterilization, the creation of death and concentration camps, human body experiments, etc. It can be said that the Nazi doctors provided important technical assistance for Hitler and his accomplices to commit crimes against humanity. This is why the first case immediately following the prosecution and sentencing of major Nazi war criminals was the “The Doctors’ Trial.” These doctors were immediately convicted and sentenced; history regards these fallen doctors as people with “no conscience and honor” and condemns them to everlasting shame.

With so much violence and murder being committed in the world today, only the most heinous acts cause us to shudder. The CCP’s state-sanctioned forced organ harvesting from innocent people, mostly Falun Gong practitioners who do not survive these procedures, is undoubtedly one of them. Outside of China, the names of the criminals behind these atrocious crimes are unknown to so many people, but history will remember these names. And the number one culprit – a former general secretary of the CCP, Jiang Zemin, who single-handedly started this brutal crime against humanity, will undoubtedly be remembered for his contribution in leading one of the world’s largest genocides.

David Matas, co- author of Bloody Harvest: Organ Harvesting of Falun Gong Practitioners in China, in his article for the Epoch Times, details the first piece of evidence indicating that Falun Gong practitioners were being murdered for their organs: “A woman with the pseudonym Annie made a public statement in Washington DC in March 2006 that her ex-husband had been harvesting corneas of Falun Gong practitioners in Sujiatun Hospital in Shenyang City in Liaoning province from 2003 to 2005. In this article, “Flip Flopping in China Over Sourcing Organs From Prisoners”, Matas notes that many doctors had been harvesting organs and that Falun Gong practitioners’ bodies were cremated after the extractions to destroy an evidence. Matas tell us that these organs were sold at high prices to transplant tourist.

There is an inordinate secrecy surrounding transplantation in China. The names of doctors, for example, are not identified. It is written in the “Statute of the International Tribunal” for former Yugoslavia and Rwanda (Articles 7 and 6 of the relevant statutes):”The United Nations Convention Against Torture” denies immunity to government officials. Such criminals are not granted immunity. People who are carrying out the policy of genocide, torture and other similar activities, no matter what position they occupy, are not exempt from criminal liability.

People do not want to consider the consequences of performing brutal crimes. In the East, there is a saying: “Good is rewarded with good, and evil meets with retribution.” We are already seeing the retribution being given to those who have committed these murders in China: The wave of criminal lawsuits against various Chinese senior officials has not subsided; on the contrary, it continues to gain strength.

In August 2000, Mr. Chu filed a lawsuit with the Supreme Court of Beijing against former General Secretary of the CCP, Jiang Zemin, former member of the CCP Politburo Standing Committee, Luo Gan, former Party Standing Committee member and head of the 610 Office** and former Vice President of the People’s Republic of China, Zeng Qinghong. After filing his lawsuit, Mr. Chu was arrested and sentenced to five years in prison and later subjected to “brainwashing” and torture. Since Mr. Chu’s lawsuit, many others have been filed in the U.S., several European countries, Taiwan, Australia and Hong Kong. Newspapers have continued to feature report after report of these lawsuits, citing the names of the accused: Jiang Zemin, Li Lanqing, Bo Xilai, Zhou Yongkang, Jia Qinglin, Luo Gan, etc.

A typical lawsuit against these Chinese officials occurred in Argentina. In December 2009, after four years of investigation and testimony from many Falun Dafa practitioners, Federal Judge Octavio Araoz de Lamadrid issued an international warrant requesting that the Interpol Department of the Federal Police of Argentina arrest Jiang and Luo when they leave China, and extradite them to stand trial in Argentina for their crimes against humanity. The judge included Jiang in Luo’s case after he discovered that the former president of China initiated the persecution of Falun Gong.
The Chinese Embassy in Argentina issued a formal letter to the Minister of the Argentine Foreign Ministry, Argentine court officials, and various state ministers, asking for an “end to all cases related to Falun Gong” immediately after they received notice of the international arrest warrants for Jiang and Luo, charged with the crime of torture and genocide of Falun Gong practitioners in China. The Falun Dafa Association in Argentina (AFDA) served as an expert witness. It twice appealed the decision, thereby markedly delaying the court proceedings. Only recently, on April 17 of 2013, did the Criminal High Court of Argentina remand a case to the Federal Court of Criminal Appeals, ordering it to reopen the trial against Jiang and Luo.

NOT TO ESCAPE THE WORD OF JUSTICE

“The schedules of the CCP officials who actively participate in the persecution of Falun Gong are kept secret when they visit overseas,” said the Falun Dafa Association spokesperson, “However, they feel the need to create an atmosphere of local Chinese people welcoming them. Every time they travel overseas, they are scared — scared of being sued by someone from the crowd.”

A good example of Chinese officials’ fears in overseas travel can be found in Liu Yunshan’s official visit to Europe. In early June 2014, Chinese state-media announced that Liu, a member of the CCP’s Politburo Standing Committee and secretary of the CCP Central Committee, would be making an official visit to Europe later that month. On June 11, 2014, right around the time of Liu’s scheduled visit, the World Organization to Investigate the Persecution of Falun Gong (WOIPFG) issued a “Notice to Investigate the Involvement in the Persecution of Falun Gong by Liu Yunshan.” As the director of the Propaganda Department of the CCP Central Committee from 2002 to 2012, Liu carried out the Party’s persecution policy against Falun Gong, directing all media in China to carry slanderous stories defaming the traditional cultivation practice. During his tenure as Minister of the Propaganda, Liu actively promoted the genocidal policy against Falun Gong practitioners. Inciting hatred towards this ancient peaceful teaching in Mainland China and even abroad, Liu helped Jiang to intensify the persecution of innocent people. Countless numbers of Falun Gong practitioners were unlawfully detained and imprisoned, tortured and sentenced, resulting in massive injuries.

Wherever Lu arrived during his European visit; Denmark, Finland, Ireland or Portugal, he witnessed the peaceful protests of Falun Gong practitioners, calling on the governments of their respective regions to bring him to justice. To avoid public exposure that might trigger another lawsuit, Liu, like so many of his other accomplices in these bloody evil deeds of persecution, canceled in vein many planned trips and hid in his hotel whenever possible, exiting and entering his hotel from the rear entrance.

In his letter to the U.S. Congress in September 2007, the well-known Chinese human rights lawyer Gao Zhisheng wrote: “Tens of millions have been persecuted in various forms. A large number of children have been expelled from school only because their parents practice Falun Gong. Some of the children were left unattended or even homeless after their parents were arrested. Our hearts ached for these children.”(On September 25, 2007, just 48 hours after sending his letter, it became known that Gao was kidnapped. For his efforts in defending the voiceless Chinese people persecuted by the Chinese government, he is still in prison).

It is clear that the Chinese officials committing these horrendous acts of genocide have nowhere left to hide. Individuals such as Gao and democratic governments around the world are speaking up against these atrocities. While they may be able to continue their crimes in China, the international community will no longer tolerate these unconscionable acts. 69 more deaths of Falun Gong practitioners have been officially confirmed for the first half of 2014, but how many more were killed in secret? Time is working against these ruthless criminals, however, and the shadow of the Nuremberg trials inevitably hangs over everyone whose hands are stained with the blood of innocents.

* Falun Gong (Falun Dafa) – is an ancient system of spiritual and physical perfection, based on universal principals of “Truthfulness, Compassion, and Forbearance.” First introduced to the public in China by Master Li Hongzhi, the system immediately spread throughout China. This system includes improving moral character, good attitude to other people, as well as doing five sets of gentle exercises. This combination helps to find peace of mind, be in a good mood, and improve health. Falun Gong practitioners are not interested in politics. They are the most law-abiding citizens who are ready to help anyone.

* The 6-10 office is an extra-constitutional body of the CCP. Created by former Chinese leader Jiang Zemin on June 10, 1999, the 6-10 office is responsible for coordinating all propaganda efforts aimed at persecuting Falun Gong.

03.04.2017 start Comments Off on Healing effects of Falun Gong practice

02.12.2016 start Comments Off on Unprecedented Crimes Against Humanity Continue Today 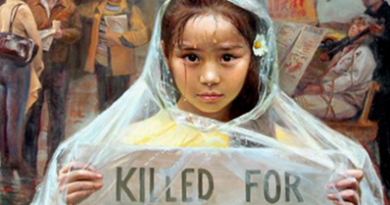 Why is China persecuting its religious minorities?

03.09.2020 Sandeep Comments Off on Why is China persecuting its religious minorities?